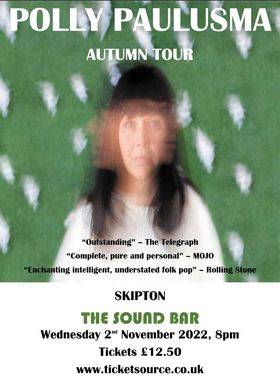 Enjoy an evening of great music in fantastic surroundings
Polly Paulusma follows up her critically-acclaimed 2021 album ‘Invisible Music’ with ‘The Pivot On Which The World Turns’, shortened to Pivot.
’Pivot’ is the fifth studio album — and the ninth release — from this growing indie-folk legend, whose thought-provoking albums since 2004’s ’Scissors In My Pocket’  have earned her plaudits from international champions as far flung as Nic Harcourt at KCRW in LA and Michele Manzotti in Italy — as well as homegrown accolades from Mark Radcliffe (BBC Radio 2) and The Guardian.
Tickets from Ticket Source